« Back to All Posts

By Far The Greatest Team at the National Football Museum

Monkeywood Theatre have commissioned a new piece of artwork exploring football fandom, in association with the National Football Museum. The comic strip illustration, BY FAR THE GREATEST TEAM, will accompany the theatre production of the same name, which opens at The Lowry on 17 September.

Artist Bob Moulder, whose previous work includes illustration for Roy of the Rovers, has worked with fans of Manchester City and Manchester United to create By Far The Greatest Team, using comic imagery to capture individual matchday memories in one unique artwork. Over the past few months Bob has met with real Manchester football fans to hear their stories of going to the games and has captured their unique experiences, ideas and characters, in an illustration. The finished artwork will be be exhibited at the National Football Museum from Wednesday 9 September until the end of November as a lasting record of football fandom in 2015. With thanks to John & Nathan Peel, Andy Bucknall, Bev Davies, Darren & John Earl, Andy Brown, Andy ‘Barney’ McHugh, Tony Slade and Catherine Whitmore. 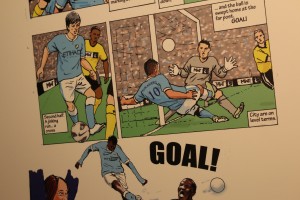 Bob says “Working on the By Far the Greatest Team project has been a wonderful experience, an opportunity to try something new – possibly unique – as a comic strip artist. Comic strips have long been produce about football, but invariably concerned with players – most famously Roy of the Rovers. Here we jumped from the pitch into the stadium to tell the stories of ordinary football fans.
Well, I say ordinary, but what an extraordinary group of people they turned out to be; people of passion who -whether United or City – shared a strong sense of community in a very positive sense. They could leave me in stitches or leave me speechless at some of their tales. And I have to take my hat off to United fan, Andy Brown, who, outnumbered 6-1 at our preliminary meetings, more than held his own when the banter was flying around.
And, as an outsider, the project also gave me a chance to get to know the city itself a bit better. Manchester is now being regarded as a the ‘Northern Powerhouse’, well if so, the rivalry between these two great clubs and their supporters certainly helps to keep the city on its toes and define its character. Just walking around Old Trafford and The Etihad on a summer’s day was an impressive, eye-opening experience. I certainly regard the two clubs in a new light and could even forgive City for beating my team, Watford, recently…” 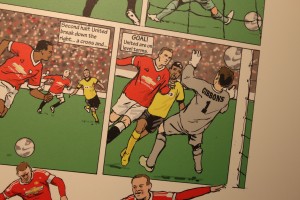 This new art commission is a collaboration between Monkeywood Theatre, The Lowry and the National Football Museum and is supported using public funds from Arts Council England. The commission is also supported by HVPD and Tony Lloyd, Police & Crime Commissioner of Greater Manchester.